Recently I discovered that the place where my last name came from no longer exists–literally.

Here’s the back story: on the 25th of February, 1827 Andreas Gunderson was born to Gunder Baardson and Anne Andersdotter in Stiklestad, Norway. Stiklestad is a very small village within the municipality of Verdal, in Nord-Trøndelag; it is most noted as the site where King Olaf (later Saint Olaf) was killed in battle during a peasant revolt. (We figure my ancestors were probably among the revolting peasants.) Anyway, Andreas married Ane Taraldsdotter and worked the family farm, the Trygstad farm. Andreas and Ane had five sons, who grew up in the late 19th century when for the first time in Norway, common folks were taking surnames instead of just having a patronymic. Their sons were Gustav Andreasson Trygstad (b. 1856), Bente “Ben” Andreasson Holst (b. 1861), Thomas Andreasson Holst (b. 1865), Anton Andreasson Trygstad (b. 1867), and John Martin Andreasson Trygstad (b. 1871). Three sons took the name of the farm as their surname, while the other two took the name Holst. Anton died in 1891 at the age of 23, and all the rest of the brothers emigrated from Norway: Gustav to Sweden and the other three to the United States. The youngest, John Martin Andreasson Trygstad, was my great grandfather. He came to Minnesota in 1901 and settled in Palo, a very small town–sort of like Stikelstad–near Aurora, Minnesota, where he raised six sons and two daughters, and passed away on March 1, 1942.

Why did the sons of Andreas Gunderson leave Norway? It is perhaps in part due to an cataclysmic event that was so significant in the history of Norway that it has it’s own name: the Verdalsraset (literally, the Verdal slide). Late on the night of May 18th, 1893, a large portion of the north bank of the Verdal River gave way, creating a mudslide estimated to contain 55 to 60 million cubic meters of mud, burying 9 square kilometers 3 to 5 meters deep in mud. 112 people died in the slide, with another four dying from injuries over the next several days, bringing the total death toll to 116. There is an old map of the slide, created by the Norwegian government shortly after the event, that shows the extent of the area buried by the slide (see below). Clearly shown on the map, near the eastern edge of the slide, is the Trygstad farm. My great-grandfather had left before this time–probably because he was the youngest son–to become a constable in Bergen. But the rest of his siblings all left within a few years of this event. Andreas Gunderson stayed on to die in Stiklestad in 1910.

All this new knowledge of my family is because I stumbled across a massively complete genealogical website assembled and maintained by a distant Holst cousin of mine, Tom Moren. His site, http://morenfamilytree.com/, has the most information I have ever found on my family. Thanks, Tom! (Unfortunately the site seems to have gone down since my original post. Darn this Web thing anyhow!) 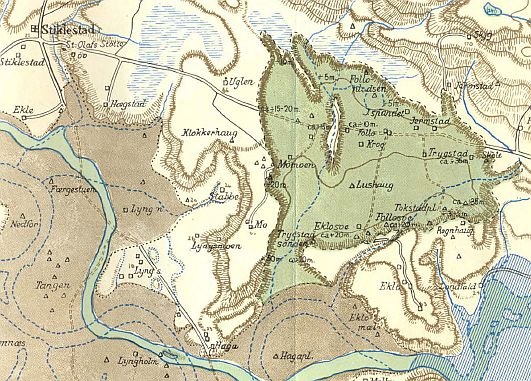 An excerpt from the Verdalsraset map showing the slide area (in olive green), Trygstad, and Stiklestad

(Repost from November 15, 2009 with updates and corrections)