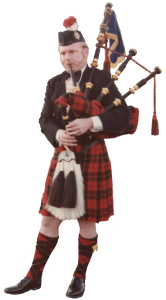 Most vocal musicians are familiar with solfège. This is the do-re-me-fa-so-la-ti-do scale brought to the awareness of the broader world by the “Doe, a Deer” song from the Sound of Music. The world of Scottish Highland bagpipes has its own sung version of the music, known as Canntaireachd.

Scottish highland bagpipe music is divided into two primary types, ceòl beag, “little music” or “light music” which are the bagpipe tunes played by pipe bands and for highland dancing, such as marches, strathspey, and reels; and ceòl mòr, “great music” called piobaireachd (pronounced pea-brach) which is the “classical” music of piping, which is very sonorous—and some say, boring. Canntaireachd was developed as a method for verbally notating piobaireachd. (It’s pronounced can-cher-ach or can-ter-ach with a rolled T, a very rolled R, and a German final CH.) I was fortunate when I was 17 to attend a two-week intensive piping school taught by the College of Piping from Glasgow, held at a YMCA camp in the California redwoods. There I learned about canntaireachd, although I can’t say I learned it. I did learn some piobaireachd, though—as well as a Goon Show episode called “The Macreekie Rising of ’74“, from one of my bunkhouse mates who had the whole episode memorized. (And yes, that is me in the picture, age 23.)

First, here’s an explanation of bagpipe music, written for fiddlers but comprehensible to most musicians, which explains doublings, throws, birls, grips, leumluaths, taorluaths, and crunluaths, as some of the explanations of canntaireachd won’t make sense without them. http://www.potomacvalleyscottishfiddle.org/public/the_pipers_corner/

(By the way, I think a key to Scottish Gaelic pronunciation is that you only say about half of the letters in a word. So piobaireachd is pibroch, taorluath is turlua, and crunluath is crunlua. The final CH is like a German ch, and Rs following hard vowels are very rolled.)

And here’s a detailed canntaireachd explanation with charts for all of the vocalizations of the notes, grace notes, doublings, throws, birls, grips, leumluaths, taorluaths, and crunluaths: http://svenax.net/site/canntaireachd/

Here are some videos of folks doing canntaireachd.
Cantarrach – Gaelic tradition – YouTube - good intro.
Tim Britton: Scottish chanting with audience drone • Sondheim Center in Fairfield, Iowa – YouTube
Struan Robertson’s Salute Canntaireachd – YouTube
Visual Canntaireachd 3: Hihorodo hiharara – YouTube - this one has a visual system although not the same on I was exposed to by the College of Piping.

Thanks for a chance to share some of my odd musical knowledge.